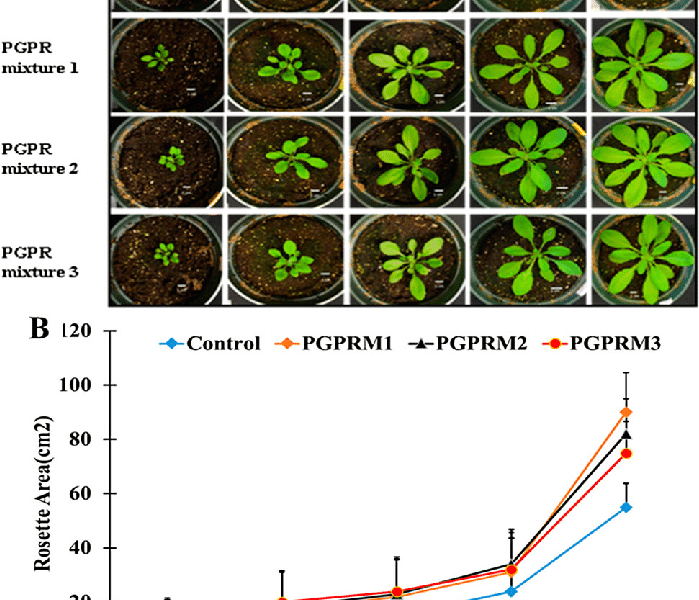 Plants did not evolve in an isolated environment but with a wide variety of different microbes. Through their evolution, plants prospered more in the presence of certain microbes and therefore evolved traits to attract and nurture them. In turn these microbes were also selected to create even deeper mutualistic relationships with plants. Specifically, the bacteria from this group that facilitate and improve plant growth are known as Plant Growth Promoting Rhizobacteria (PGPR) and have been an extensive subject of plant research during the past 40 years. In this article I am going to talk about their use in hydroponic culture and the evidence we have about their growth promoting effects in the absence of soil.

The positive effects of PGPR in general are well established. These two (1, 2) literature reviews address the subject in depth and cite a lot of the research that has been done around PGPR for crops in general, although none of these two reviews address their use in hydroponics specifically. What we know from all these literature is that the positive effects of PGPR are mostly attributed to three different phenomena. The first is an increase in nutrient availability for the plant, mainly through making some nutrients that are inaccessible to the plant accessible (mostly N and P), the second is through the release of phytohormones – chemical substances that stimulate plant responses – that prompt plants to develop more tissue in several different ways, and the third is that these bacterial colonies provide defenses against pathogens that could be attacking the plant if they were not present. Many different species that show these effects have been identified – some even specific to single plant species – but from those species those from the genus Bacillus, Agrobacterium and Pseudomonas have been the most widely studied and shown to be effective.

We also know from the research that the application of PGPR is not trivial and exactly how plants are inoculated with them plays an important role in the improvements they might show. Inoculation can be done in seeds, cuttings, transplants or through the entire growing/flowering periods. You can use both root and/or foliar applications, different concentrations of bacteria and different additives can also be given to try to make the inoculation steps more successful. These bacteria can also use oxygen in solutions, so using too much can also starve roots of important oxygen and cause strong negative effects before any positive effects can be seen, using too little means the bacteria die without being able to form a stable colony. The table below gives you an idea about how complex the entire application universe can be and the sort of effects that have been observed in field/greenhouse trials in soil for a wide variety of plants. The reviews cited above contain a lot of additional references, make sure to read them if you’re interested in a wider view of the available literature on the subject.

As you can see the effects under these conditions have been very positive, with sometimes highly significant increases in root/shoot weights and fruit/flower yields. However soil itself is not a perfect media and plants grown in soil are also not subjected to ideal nutrition. Since one of the main benefits of PGPR is to increase nutrient availability, some of these benefits might be partially or even completely negated when moving onto hydroponic culture, where we seek to provide plants with an ideal environment. Research of PGPR in hydroponics is not very common though, as hydroponic growing has traditionally made a big deal about sterility, as growers mostly want to prevent pathogens from getting into their crops.

Thankfully there have been some people who have led the way into the world of PGPR in hydroponic research so we have started to see some positive evidence of their use, even under hydroponic growing conditions. The above table shows you 5 references for papers that have studied PGPR in hydroponics – mainly in tomato plants – where it has been pretty well established that applications of bacteria of the genus Pseudomonas can increase yields in the order of at least 10%+. Some studies, like 3 and 4, show that significantly more gains are possible for different combinations of bacteria or application methods. I couldn’t find a lot of additional studies in this direction, but the above studies start to show that the use of these bacteria in hydroponics can be positive.

A lot of questions still remain though. If these bacteria are benefiting plants because of the introduction of plant growth regulators (PGR) in solution, then we might ask if the direct exogenous applications of these PGRs is not a better way to obtain and control the benefits without the need to maintain a live population of bacteria in a mutualistic relationship with plant roots. Research has indeed shown that the exogenous application of many PGRs can enhance the yields of different plants. Do we apply PGRs or do we keep a culture of bacteria in our media? Can we do both and obtain even better results? Sadly right now there are no answers to the above questions and a lot of additional research is needed before we even get close.

For now the research on PGPR is telling us that these bacteria work amazingly well in soil and can also provide substantial benefits for some plants in hydroponic culture under certain conditions. We know that the bacteria from the genus Pseudomonas and Bacillus are the most interesting candidates to study in hydroponics and we know some of the inoculation techniques that have worked. If you want to experiment with them in your hydroponic crops, make sure you take the above information into account. The right choice of bacteria, concentration, inoculation method and additives can make a big difference in the results you get.