Certainly if you have been involved with hydroponics for a while or even if you have just started to research this awesome field you might already know that science has only discovered a handful of elements to be necessary for plant growth. From the first 92 elements of the periodic table, plants have only been proved to require C, H, O, N, K, P, S, Mg, Ca, Fe, B, Cu, Mo, Zn and Mn for their adequate growth. However it is certainly true that some other elements have proved to be beneficial – in certain quantities – for the development of several different crops. Such elements include Co, Si and Na. On today’s article I am going to introduce you to Si, the way in which plants absorb it, how it should be administrated and the positive effects it is bound to have on your hydroponics plants.
Silicon is definitely one of the most abundant elements on the Earth’s crust, forming – with aluminium – a very large portion of the earth’s heavier elements. Silicon is mainly present in nature as the silicate ion (SiO3(2-)) forming solids with different degrees of polymerization known in the geological world as silicates. From these silicates we have a very large variety of minerals, from the aluminosilicates formed with aluminium to the very fine quartz particles (white sand) making up some of the most beautiful beaches throughout the world.

However when thinking about silicon and our plants we need to think about the way in which plants would be able to absorb this element. The minerals in which silicon is found are quite insoluble at room temperature and for this reason they cannot be absorbed efficiently by plants. If we want our plants to get some silicon we need to provide it in a form which is soluble and readily available for absorption. Such a form is sodium silicate (Na2SiO3) usually available as a pure solid or a solution in water called “liquid glass”.
– 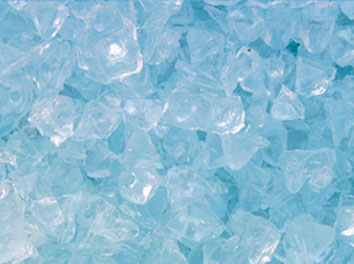 Studies in the field of hydroponics have shown that different types of cultivars such as wheat, tomatoes and cucumbers react positively to a moderate addition of silicate ions. When water glass is applied at a concentration of around 100pm (measured as SiO2), positive effects are found including increased weights of fruits, increased nutritional composition and – most importantly – a very important increase in the resistance to bacterial and fungal diseases. It seems to be that plants use the silicate ions to “line-up” their cell-walls offering a strong additional mineral resistance to any incoming pathogens that would want to get into their cells. Since plants lack and active immunological system, passive measurements like this which increase cell-wall strength are likely to be key to increase disease resistance for many crops.

However most people are quite careless about the way in which they apply this “liquid glass” since they are mostly unaware of the very sensitive equilibrium that takes place to maintain silicate ions in solution. Silicates are by definition very insoluble and the acidic pH in hydroponics is bound to cause some precipitation of different reaction products of this ion with other ionic species present within the hydroponics solution. The silicate ions can also form silicic acid and start to polymerize into complex macromolecular constructs. As a matter of fact, several studies do include information about the problems with drip systems, sprinklers, nozzles, etc, when using silicate ions since they tend to precipitate easily outside the hydroponic solution.

I would suggest – and so I have done with my own systems – that it is better to apply small quantities of silicate ions every 2-3 days, instead of applying a large amount during the beginning process. Applying a large amount of “liquid glass” (the 100ppm for example) would most likely end in most silicate falling out of solution and only a small part becoming available for plant absorption. I believe that the best thing to do is apply about 5ppm (measured as SiO2) every 2-3 days until the solution needs to be changed. This provides both higher stability and a better control over the solubility of this tricky ion within the hydroponic solution. Of course this is purely anecdotal evidence and no controlled study has yet shown this to be better. If you want to obtain results as those of the scientific literature available then applying the 100ppm on every reservoir change might be the wisest thing to do.