The media exchange solution test: A better measurement of media effects in hydroponics 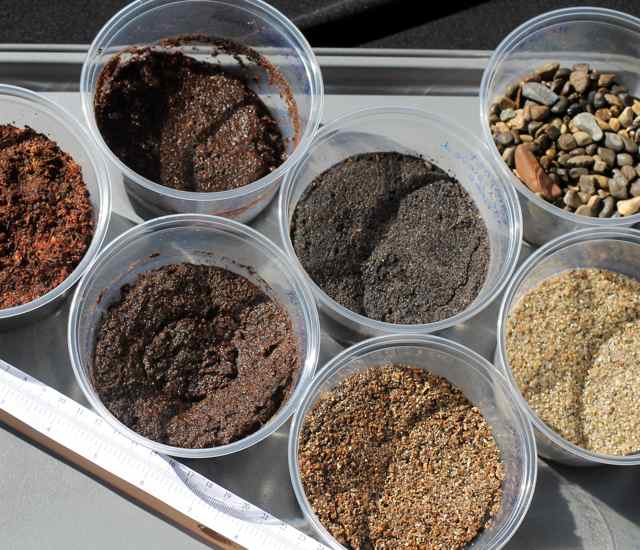 In the traditional hydroponic paradigm we want media to be as chemically inert as possible. The ideal media in this view would absorb no nutrients, give off no nutrients and would not decompose or react with the nutrient solution in any way. However none of the commonly available media sources comply with these properties, reason why we must be vigilant and properly adjust the media we use to fit the needs of our hydroponic setup. In this article I am going to talk about the idea of using a direct comparison test of the nutrient solution against the media, to understand the effect the media will have when exposed to the target nutrients and how this can help us adjust our solutions to better play with the selected growing medium.

First, let us understand how the media interacts with a hydroponic solution. The media can do all of the following things:

Of most interest to us are the third and fourth points above, this is generally understood as the “exchange capacity” of the media. This determines how many and which nutrients the media can store. Different media can have storage sites with different affinities and in hydroponic setups we generally want to aim for the minimum energy state of these storage sites as they relate to our nutrient solution. Media that is already in equilibrium with the nutrient solution will tend not to change it while media that is far away from equilibrium with the solution will change it strongly towards the equilibrium point.

Think about coco coir, a commonly used media in hydroponics that can have a wide variety of different ion exchange capacity values and a lot of different ions initially in its “storage sites” due to the differences in sourcing materials and treatments done by different companies. Coco coir initially contains high amounts of potassium and sodium ions, but some companies treat it with Ca nitrate, which changes all these “storage sites” to contain Ca instead. These two sources of coco would interact very differently with our nutrient solution. In the first case the coir would exchange a lot of its potassium for Ca and Mg ions in solution – because these ions have higher affinity for the “storage sites” – while in the second case a little Ca would be exchanged for other ions (because all ions are in equilibrium with all the storage sites). The changes to the solution are very different and totally different approaches in nutrient composition changes are required.

Traditional soil tests could provide some answer to us, they would definitely show the ions that could be exchanged to be different in both cases. But they tell us little about the equilibrium position of the media against our target nutrient solution. To make things more realistic we can actually do a test where we pass our actual nutrient solution through a column of media that is exactly what we’re going to run it through in real life (with no plants of course). We then collect the input and output solution and run lab analysis of both of these solutions. We can then compare the results and see how much the media is actually changing the composition of our input solution and we can then make some decision to adjust. Such a test would proceed as follows:

The difference in nutrients between both solution will show us what we should initially be doing to maintain a consistent composition of the nutrient solution, given the interaction with the media. If the interaction is too strong it can also tell us that we shouldn’t be using this media without previously treating it to ensure the imbalances do not happen. For example media like biochar can have an extremely high affinity for metal chelates and nitrogen compounds, if we ran our solution through the media and it turns out that it soaked up almost all of our iron and ammonium, we wouldn’t want to just add more nitrate and heavy metals but we would like to pretreat the media with a concentrated solution and then repeat the test to ensure that the media is at a level of activity that we can correct for.

A given media source that is acceptable should not strongly affect the nutrient solution. Any media that does this in the media exchange test requires correction so that the ability to take elements from the nutrient solution is reduced. The test will tell you exactly what the media is finding most appetizing and the treatment options will then be substantially easier to plan. A coco coir that shows it soaks up almost all the Ca will need to be treated with a Ca nitrate solution and a biochar that absorbs a lot of ammonium will need to be treated with an ammonium sulfate solution. These are some cheap pretreatments that will save a lot of heartache within a hydroponic setup and will make the ongoing growing process substantially easier to manage.

This is one of the simplest and cheapest tests that can be done to address media effects. However it is by no means comprehensive in that it does not show us other important media properties that might be crucial for selection. It is important to consider that this test gives us only a glimpse of the chemical properties and the interactions with the actual nutrient solution we intend to use. Other media specific analysis and more complicated media run-off tests can be necessary to address the full extent of the interactions through an entire crop cycle.