Tensiometers (irrometers) the best way to time irrigations in hydroponics 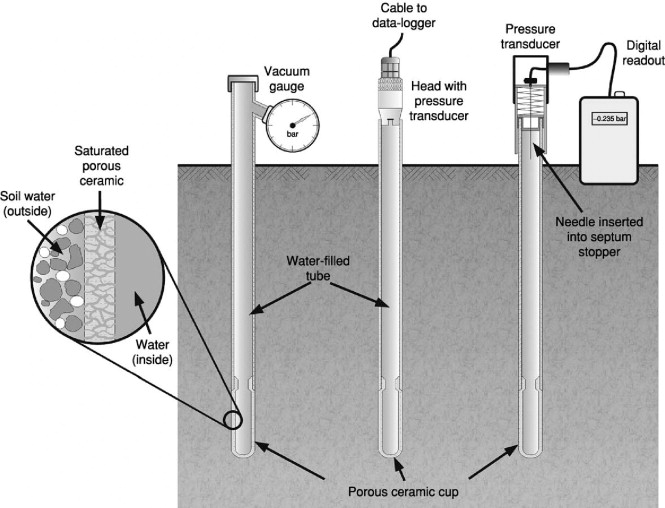 I have recently written blog posts about the measurements of water content in media in hydroponics. The first one was about the problems with resistive moisture sensors in hydroponics and the second one showed you a low-cost capacitive sensor that does the job adequately. However, while capacitive sensors are significantly better at measuring moisture compared to resistive sensors, they are not the only type of reliable sensor that we can use to measure water content in hydroponics. In this post, I want to talk about tensiometers and how they can be used to measure water potential in hydroponics and soil. We will go a bit into how tensiometers work and why they are the most reliable sensors for irrigation timing.

Both capacitive and resistive sensors try to measure the amount of water in the media by measuring how the electrical properties of the media change when different amounts of water are present within it. However, plants do not care so much about how these electrical properties change but they care most about the effort that is required to move water from the media into the plant’s root system. The tensiometer is a sensor that is designed to measure the difficulty of this process. The device is built using a ceramic cup that is filled with degassed distilled water that a pressure gauge is attached to. When water is not present outside the tensiometer, the water inside of it will face a pressure to go out – causing the pressure gauge in the tensiometer to sense a vacuum – as water is added to the media, this pressure is reduced.

The above is very similar to what plants actually experience. When the media is wet, the plant has an easier time taking water into its root system, when the media is dry, the plant needs to fight in order to keep water inside of its roots from flowing into the media. Since this process mimics what the plants actually care about, it accounts for a lot of variables that can directly affect this pressure, such as the osmotic pressure of the solution and the chemical composition of the media. While resistive sensors are harshly affected by these variables and capacitive sensors are to a large extent insensitive to them, tensiometers account for them in a way more similar to how plants do.

Although tensiometers can be analogue – as shown in the first image in this post – there have been great strides in the creation of digital tensiometers that you can use to monitor your crops. The company Netafim (who did not sponsor this post and does not have any affiliation with me) provides digital tensiometers that send measurements to a central hub with data logging capabilities. Although they have been created mostly for soil, they can also be used in hydroponics to directly monitor the moisture content – or perhaps more accurately the “drying pressure” – of the media. You can also find tensiometers at irrometer.com (who did not sponsor this post and do not have any affiliation with me) where you can get both analogue and digital sensors that you can use within your custom setups, including Arduino builds. In a future post I will show you how to build such a monitoring setup. Please note that the Watermark sensor they sell is not a traditional tensiometer, it is a type of resistive sensor that also uses a ceramic membrane, a sort of “hybrid”.

Note that tensiometers are not perfect sensors, they come with a substantial set of problems. The first is that they are going to be sensitive to salt buildup because of how water flows in and out of the tensiometers, if salt accumulates in the pores of the tensiometer’s ceramic cup, it will lose its ability to properly sense the water potential of the media. This can be especially problematic if significantly hard to dissolve salts accumulate within the irrometer’s structure. The second most common issue with them is their slow response, tensiometers by their very nature rely on reaching a steady state within a process that is significantly slow – water flow across a ceramic – so they will tend to respond slowly to changes in the water content of the media, as the process reaches this state.

All-in-all, if you want the absolutely best way to time irrigations of our media in hydroponics, then a tensiometer that is placed right at the root ball level of your plants will offer the best results for this, especially if you’re using significant volumes of media. Tensiometers/irrometers cannot be beat when it comes to timing the watering of plants in coco or peatmoss, while they can struggle with media that are smaller, like rockwool, due to the volume that the tensiometer itself has.