How to Have a Constant pH in Hydroponics – No More Corrections ! :o)

Those of you who have read my other articles or all of you who have already had your first hydroponic crop know that pH is a constant concern which becomes a little bit of a pain after a while. Hydroponic gardeners need to constantly adjust the pH of their hydroponic solutions to the desired level and - although many are really obssesive about this - it is truly not very comfortable to have to do these corrections day in and day out. So how do we completely avoid the need to modify the pH of our hydroponic crop ? How can we maintain the pH of our crop constant as time evolves ? Through this article I will show you what I have found out - both through personal research and an extensive literature search - and you will see that there is a very EASY solution to maintain the pH of your hydroponic solution with NO further modifications.

So how do you maintain pH constant ? There are several ways to tackle this problem. The use of a citrate/buffer has been discussed on a previous article but its use is affected by the fact that calcium citrate is insoluble and nutrient solution composition limits the concentration and effectiveness of the buffer to around 1mM. Carbonate ions also pose a problem since their concentration also needs to be kept at a safe thresehold for the plants which is also around the 1mM level. In the end this buffer is able to control pH to a good extent buts its practical use is limited by calcium levels and the presence of citrate ions may also cause important complexation of ions such as zinc, an effect which - if used excesively - may cause micro nutrient defficiencies.

How do we keep pH constant without using any buffer ? The solution comes as ion exchange resins. These substances are polymer like matrixes which have functional groups on their surface that react with acids and bases and provide you with a constant pH level. Ion exchange resins are insoluble and the only thing they need to be efficient is to have solution passed around them all the time. So it is simply a matter of putting the ion exchange resin in a place where fresh passing solution will be in contact with it all the time - like inside a filter connected to the irrigation system - and thats it, no more pH problems, no more additions to control pH, problem absolutely solved.
- 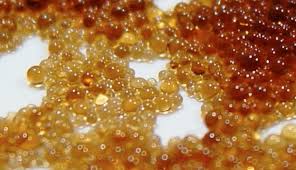 -
However not ALL ion exchange resins work. Particularly the type of resins that work well in hydroponics are weakly acidic cation exchange resins and their effect has been studied extensively on several peer reviewed publications. If you want to use these resins in your hydroponic system you need to buy the commercially available Amberlite DP-1, Amberlite IRC-50 or the more recently available Amberlite CG50. You would need about 1g per gallon of solution you wish to control and you should place the resin in an inline filter - those used for drip irrigation are great - to achieve the desired pH control levels. When the resin stops working you simply need to take it out, wash it place it in dilute hydrochloric acid (your average pH down solution will do), then wash it again, to regenerate its surface and prepare it for another crop.

If you are wondering where you can buy these resins, sadly DP-1 and IRC-50 have gone out of production but small quantities are usually available on ebay if you want to buy them. Similar resins are also produced by chinese companies right now so if you are into importing you may also explore that option. The easiest resin to get is Ambertlite CG50 which is the weakly acidic resin that replaced the two above, you can buy it from well-known chemical suppliers here and here. They are expensive but they can be renewed almost infinitely (more than 100K times) :o)

I have used these resins with very good success on several hydroponic crops and I can tell you that I haven't added a drop of pH up or down during more than 3 months of growing. When pH fluctuations start to become important I simply take the resin out, regenerate it and put it back in. A very simple process which needs to be done about once every 3-4 months. If you want them to last longer, simply add more resin ! I hope that this article helps all of you who have been dealing with the pH adjustment problem finally get rid of this matter an achieve a new era of success in your hydroponic gardening :o)