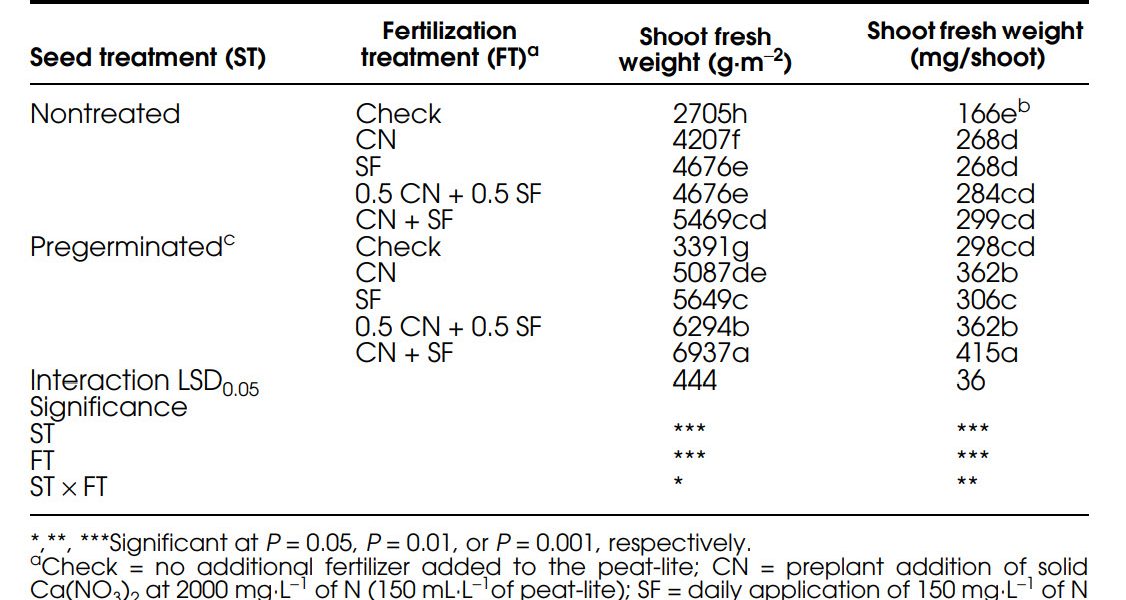 One of the most important goals in microgreens is to maximize the amount of weight gained by shoots from seed to harvest. Since the entire upper body of the plant is harvested and plants are sold by weight, maximizing the weight gain is vital in order to obtain the highest possible margins in a crop cycle. Hydroponically cultured microgreens offer the grower an unprecedented control over the microgreens’ nutrition, with the ability to tightly control nutritional parameters in order to maximize this weight. In this article we are going to take a look into the scientific literature surrounding microgreens and what we know about maximizing their yield and quality using nutrient solutions. I will use the table below to reference different articles in the literature.

Despite the overwhelming growth in the microgreen industry during the past 10 years, the amount of research looking into microgreen nutrition has been surprisingly limited, with only a handful of papers looking at the relationship between nutrition and yields or quality. Paper one contains a comparison between microgreens grown in either compost, sterile water or a solution using a 0.4% FloraGro Advanced Nutrient solution (4mL/L). The results show clear weight benefits from using hydroponic nutrients, with the weight being markedly higher (mean of 24.64g vs 21.01g) between the sterile and hydroponic treatments. However the concentration of different minerals was actually lowest in the plants using a hydroponic nutrient.

Papers three and four look at different forms of Ca nutrition – either Ca chloride or Ca nitrate – and different ways to apply this treatment to see if it makes a difference in microgreen production. Paper three, shows a statistically significant gain in weight when using calcium nitrate, either applied into the media pre-cultivation or applied within a nutrient solution. The best results were found when both treatments were carried out and represented an increase of more than double in terms of weight over the control. The fact that paper four fails to show a consistent increase in yields using Ca chloride, suggests that this has to do mainly with the nutritional contribution of the nitrate and not the calcium ions.

Paper two is rather interesting, as it looks into different nutrient solution strengths (either 0, 50 or 100%) using a solution published for hydroponic forage. The results – in the table below – clearly show that there is a strong weight gain as the nutrient solution concentration increases, again showing that at a full strength solution there is an expected increase of more than 2x in the final weight. However this comes – in agreement with paper one – at the potential expense of nutritional value. The paper shows a significant decrease in carotenoid concentration when nutrient solution strength increases, which the paper hypothesis is caused by high nutrient concentrations slowing down plant metabolism. This hypothesis is however hard to reconcile with the larger and heavier plants.

Article five is also an interesting example of the use of microgreens to carry out antioxidant supplementation. Sodium selenate was used to prepare a solution to treat basil seeds and the resulting microgreens were found to be fortified with selenium. This might be an interesting way to incorporate mineral micro nutrients into microgreens and therefore increase their presence within our diet. However there is also the potential to hyperaccumulate these nutrients, so experiments of this kind should not be done with adequate care and lab analysis to ensure proper doses of these micro nutrients.

From all of the above it seems quite clear that the research of hydroponic nutrients in microgreen production is in its very early infancy. So far only a handful of research papers have been published on the subject and the conclusions so far seem to be that hydroponic nutrient solutions – in a couple of different forms – tend to significantly increase microgreen production weights. However it is also clear that there is a strong interaction with the nutritional value of the microgreens and using nutrients can in fact lead to decreases in the nutritional value, despite the significant weight gain from the process.

The echoes of the above can be seen in a wide variety of anecdotal experiences on youtube channels and forums. Growers running side by side experiments seem to have found the same phenomena (see this video for an example), where adding nutrients increases yields significantly but at the expense of some of the flavor – and potentially nutritional – characteristics of the microgreens. Some growers have therefore chosen to avoid nutrients – to preserve flavor qualities – while others have chosen to use nutrients because of the increases in marketable appearance and yield.

There is a lot of research to be done on the subject. It would certainly be interesting to find out if we could somehow have the best of both worlds.