Why TDS is NOT equal to Total Dissolved Solids in hydroponics 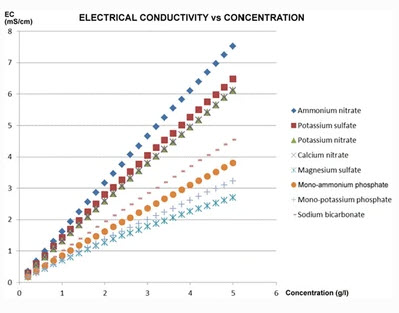 Electrical conductivity is a very commonly used measurement in hydroponics, yet a very poorly understood one. I have written several posts about conductivity in the past (1,2,3) and today I want to talk about the use of the term “Total Dissolved Solids” and the poor usage of the unit “ppm” in order to express a measurement of electrical conductivity. In this article I will walk you through why this term exists in the first place and why its use in hydroponics is terribly misleading for growers.

Conductivity is just a measure of how easy it is for an electrical charge to go from one electrode of a certain area to another. It’s generally expressed in mS/cm, which is a measurement of conductance (the opposite of resistance) and area (the area of the electrode). How in the world do we get from this to a measurement like “ppm”, which measures the concentration of something in mg/L? What does a measurement of 500 ppm even mean? What is it that we are expressing a concentration of?

The answer lies in the practical uses of conductivity and a simplification to make the evaluation of water sources easier. Conductivity is generally linearly proportional to the amount of a pure salt dissolved in solution at low concentrations. For a pure salt like table salt (NaCl) the higher the concentration of the salt in solution the higher the conductivity (you can see this in the image above). People working on water quality realized that they generally dealt with similar salt combinations (Mg and Ca carbonates and possibly some Na and K chlorides) so they decided to use some standard salt mixtures (say KCl, NaCl or some mixture of Ca/Mg/K/Na salts) and then use conductivity as a proxy for the concentration of these things that are actually in solution. So the “ppm” that your EC meter reads is just the equivalent conductivity of some standard. A meter reading 500 ppm in conductivity is telling you “your solution has the same conductivity as a solution of the standard at 500 ppm”. The “standard” can change – as mentioned before – which is why there are several different TDS scales. One meter might be telling you it’s the same conductivity as a solution of KCl with that concentration, while another might be in NaCl.

The above is very useful when you’re measuring things that tend to be similar but this becomes a complete nightmare when the composition of what you’re measuring can change substantially. In hydroponics you have a wide variety of different salts, all with very different conductivity values at different concentrations. Look at the graph above, which shows the conductivity as a function of concentration for 8 different salts commonly used in hydroponic culture. If you prepare three solutions, one with 1000 ppm solution of potassium sulfate, another with 1000 ppm of monopotassium phosphate and another with 1000 ppm of ammonium nitrate and measure them with your conductivity meter they would all give very different results. The meter might be close to 0.95mS/cm for the monopotassium phosphate, but it might read almost 1.5 mS/cm for the potassium sulfate. Both solutions have 1000 ppm of “total dissolved solids” but the conductivity meter is telling you one has 500 ppm and the other almost 800 ppm, none of them even close. This is because “total dissolved solids”, as used in water quality measurements, is a meaningless measurement in hydroponics as it relates to the actual ppm values of things dissolved.

This is the main reason why you should never compare the EC values of nutrients that contain different ratios of salts, because they are simply not the same. One nutrient might give you 100 ppm of potassium at some EC level, while another might give you 200 ppm. Thinking that having the same EC level means that both are at the same “strength” is a big mistake, since this is never going to be the case when two nutrient solutions are mixed with different ratios of nutrients. This is also why comparing vegetative and bloom formulation EC values is not correct. A solution in veg might contain a lot more of nitrates while a solution in bloom might contain more phosphates. As we saw above this might mean that a solution of the “same strength” might actually have a significantly lower measured EC value.

Since the TDS measurement is not telling you anything about “total dissolved solids” in hydroponics, you should avoid using it to avoid confusion. This is important since nutrient concentrations are usually expressed in ppm as well, ppm of actual nutrients dissolved in solutions. Instead use the normal conductivity measurements of your meter in conductance per area. You should also take care to only use EC values to talk about comparative strength when you’re talking about a formulation where the ratios of nutrients remain the same. If that’s not the case, then you should not talk in comparative terms between the two solutions as this might deviate a lot from reality.

My advice is to not think in EC terms to begin with, but to think about nutrient concentrations, prepare solutions that match the concentrations you want and then use the EC of those solutions as references to know whether they are prepared correctly or not. The conductivity should be a measurement used for confirmation but not as a guiding principle. For example the aim should be to “prepare a solution containing 150 ppm of N and an K:N ratio of 1.2” not to “prepare a solution with an EC of 1.2 mS/cm”.