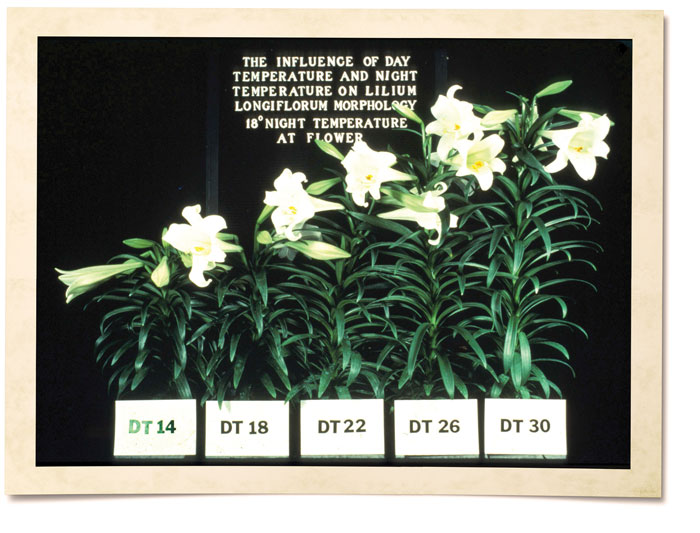 In this article series about “keeping plants short”, we have explored the reasons why short plants are desirable and how this can be achieved using gibberellin inhibitors. However this is not the only effective way to control plant height and several other ways – some using no chemical means – can be used to keep plants short. In this article I will be talking about the use of day/night temperature differences in order to control plant height, what the research about this says and how it can be effectively applied by growers to achieve shorter plants.

The idea of using day/night temperature differences to control plant height can be traced back to the late eighties and some research done by people at Michigan State University (1). This research in easter lilies showed how plants grown at a constant night temperature (68F, 20C) but subjected to even lower day temperatures or simply drops in early morning temperature could grow drastically shorter. The results surprisingly showed that a 14F temperature drop during the beginning of the day – first two hours – could actually cause the plants to receive the same effect as if the day temperature was lower during the entire day, yet the plants remained highly productive. This technique of reducing temperature during a few hours during the way was referred from this point on as “DIF”.

Experimenters then began testing across other plant species and found the results to be mixed. In this paper (2) chrysanthemum, poinsettia, begonia and kalanchoe were all tested in a -6 C DIF experiment and while chrysanthemum and begonia both responded in the expected manner, the kalanchoe actually responded in the opposite way and showed stronger elongation of the flower stems. In all of these cases the use of growth regulators – gibberellin inhibitors – was still needed to ensure plants stayed at the required height. This was one of the first studies that pointed to the fact that the DIF technique is tremendously crop dependent.

During the nineties it was established that DIF did work for several common crops, for example cucumber and tomatoes showed to be sensitive to the DIF effect, particularly when the first two hours of the day showed a temperature drop. In this case the effect reduced both the inter-node distance and was directly proportional to the difference in temperature. It was also established that some plants prefer pulses of cold temperature during the end of the day, while others might prefer this pulses even in the middle of the night. It was also showed that strong negative DIF treatments caused negative effect related with a reduction in chlorophyll production, resulting sometimes in even plants showing signs of chlorosis. Plants grown in negative DIF were also shown to have lower total dry weights although depending on the magnitude of the DIF, limited or sometimes even positive effects on weight and yields could be seen. You can read more about the above in this review from the late nineties which also contains a lot of literature references for early DIF research (3).

The DIF method has shown to be a reliable way to control the height and vegetative growth of many different plant species, although for some it does not work very well. In general the researchers who apply negative DIF methods for reducing stretch tend to have the most success with a -10C (-18F) increase in night over day temperatures. If testing on a new plant the recommendation would be to start with a 2 hour temperature drop in the day temperature of this magnitude for the first 2 hours of light – starting the drop 30 minutes before sunrise – and see which results you can get. This is likely going to be the cheapest in terms of both climate control and potential disruptions in yields caused by this technique.