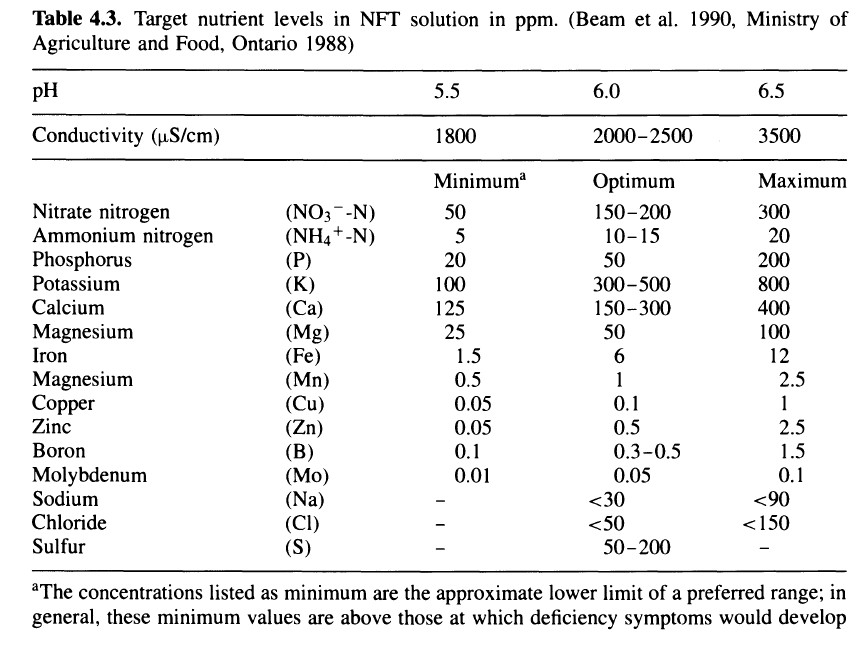 When you want to prepare a nutrient solution one of the first things you want to know is which concentration ranges are appropriate for the growth of the specific plant specie you want to cultivate. You will definitely want to make sure that you do not feed either too much or too little of any of the essential nutrients a plant requires. Lucky for you there is a ton of research surrounding what we call “sufficiency ranges” in hydroponic culture. The sufficiency range of a nutrient is simply the range of concentration where a plant does not show a toxicity or a deficiency but develops in a normal manner. On this blog post we will talk about the different sufficiency ranges that are provided across the scientific literature and what they tell us about plant nutritional needs.

The first thing to be clear about is that there is no single “sufficiency range” table. There have been many people who have worked on this subject using different plants and each one of them will tell you that the sufficiency range is slightly different. The above hydroponic nutrient concentration table shows you the minimum, optimal and maximum nutrient values that were determined by the Canadian ministry of Food and Agriculture using NFT systems. These requirements were determined for flowering plants – mainly tomatoes – reason why you can see the optimum Ca range at 150-300 and the optimum K range at 300-500. Also notice the very high optimal Fe requirement of 6 ppm. This is almost certainly using either a form of unchelated Fe or an Fe chelate that is not so stable in the hydroponic conditions under study. The sufficiency range of micro-nutrients also depends on exactly what form of the micro nutrients you use since some forms are absorbed much  more efficiently than others (it’s not the same to have 3 ppm of simple Fe+2 or 3ppm of FeEDDHA). 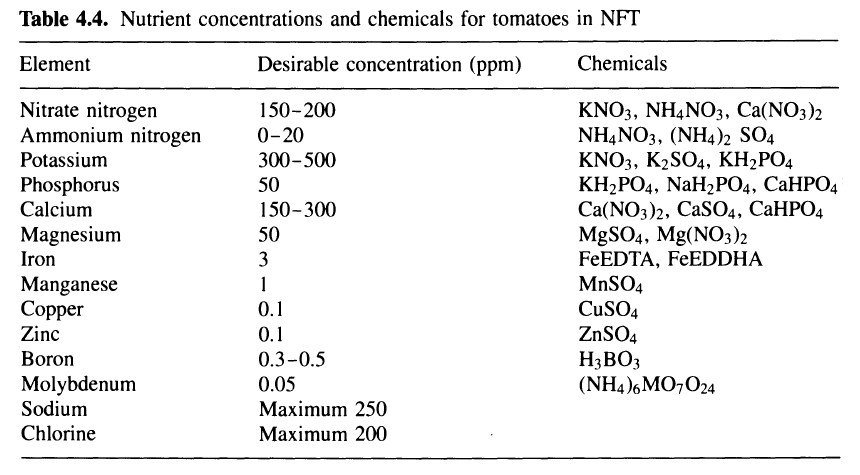 The second image shows another sufficiency range table for hydroponic nutrients. This time we can see the source salts being used. As you can see we have a fairly good agreement in the macro-nutrients – with perhaps the exception of the ammonium minimum being set at zero – but in the case of the micros we see that the recommended amount of Fe is actually 3 ppm instead of the 6 ppm that were recommended before. This is most probably because in this case some percentage of this was given as FeEDDHA, which is much more effectively absorbed than either unchelated Fe sources or Fe EDTA. The boron range is exactly the same and this is undoubtedly because boron is always supplied in the same manner in hydroponic crops, therefore its sufficiency range tends to be coherent as long as the same plant specie is used for determination.

Macro nutrient suggestions are also not free from variations. Depending on the method used to determine the sufficiency range there can also be differences. The table below shows you yet another sufficiency range table which was geared towards maximum yields in terms of product weight. In this case You can see optimum K concentrations in the 50-200 range which is confusing given that the two tables before had suggested a much higher range of 300-500 ppm. Who is right here then? Do plants require 300-500 ppm of K for optimum growth or can they do fine with 50-200? 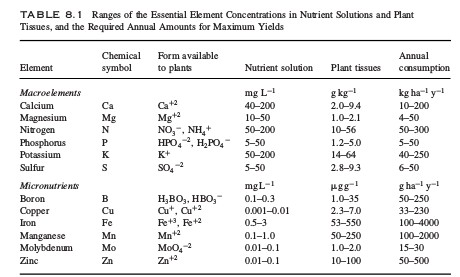 The answer is that both can be right. Under some growing systems plants might require the solution to have more K because the setup might make K absorption harder while in other setups you might want to have lower K. This sort of contradiction surfaces constantly in hydroponic nutritional studies, simply because the variability in the subject of study (yields of a certain plant) will tend to vary very significantly depending on exactly which plant is grown and under which conditions. Just the plant and its development phase can make a huge difference in what has actually been found to work better.

Checkout for example the Israeli service recommendations for growing three different plants across their life cycle. You can see that the amount of nutrients they use can be different from what we have learned before. In this case their recommendations for all plants fall within the sufficiency ranges in the previous table but notice how for strawberry plants we use a potassium level that is at most 90 ppm while for tomatoes we go as high as 250 ppm within the fruit ripening stage. Also notice how in the case of sweet peppers the P can go as high as 150 ppm while for tomatoes we always stay within the 30-40 ppm range. If we had followed the previous recommendations we would have never considered something like a 150 ppm of P to be an acceptable value for this element, since all of these sufficiency range studies point to the optimum P being 50 ppm. However a sweet pepper is not a tomato. In the same way that a house cat isn’t a tiger. 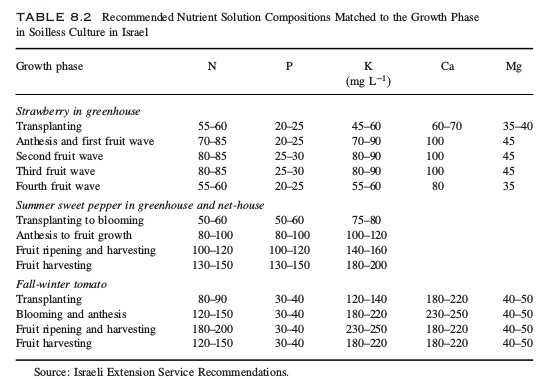 So although sufficiency range tables are good to determine starting points, you should be well aware that these tables need to be considered in the context in which they were created. The plant used, the exact nutrient salts used and the growing system can all play significant roles that may cause two sufficiency studies to tell you very different things. In the end the best thing that can be done is to use the values for the plant that is taxonomically closest to the one you want to study in the system that resembles your system the most and then go from there to establish what the best values are in your particular case.