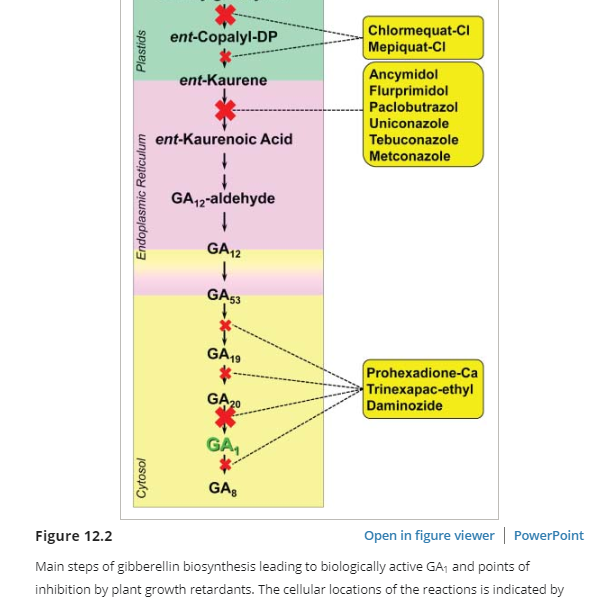 Plants grow both vertically and horizontally. A plant will develop branches along its stem – expanding horizontally – and the stem will grow towards the sun, making the plant taller. This vertical growth is almost always an undesirable quality, both in extensive and intensive crops, which creates an opportunity to improve plant cultures by attempting to reduce the height of plants. You can read more about why making short plants is important in this post. Although there are many potential ways to achieve this – which I will discuss in detail in future posts – this post will deal with the most powerful tools that have been developed for this purpose, a class of plant growth regulators (PGRs) known as gibberellin inhibitors or more commonly as “growth retardants”.

Making a plant grow shorter is no trivial task. This is because we do not want to make the plant less productive, but we want the same productivity of a tall plant in a much bushier and compact package. We therefore need to inhibit vegetative growth without affecting the flowering stages of our plant. Scientists figured out around 30 years ago that a set of plant hormones called gibberellins played a critical role in the vegetative growth of plants – especially the elongation of a plant -so these became a prime target to stop growth. If you can disrupt the gibberellin creation pathway right when the plant is supposed to stretch, then the plant will stop growing vertically without the flowering development of the plant being affected at all.

We have found several different types of compounds that can do this. The figure above shows you the gibberellin synthesis path and the steps where different molecules have been shown to disrupt it. Among the most powerful and commonly used were the ones that disrupted the conversion of kaurene to kaurenoic acid, with the most famous one being paclobutrazol. In the other groups the most commonly used ones were chlormequat and daminozide. These molecules are all part of the first generation of gibberellin inhibitors and they did exactly what they were supposed to, proving to be extremely powerful growth retardants that were able to keep plants compact and strongly increased yields in several different crops.

However it soon became evident that their toxicity and retention in plant tissue is significant. Paclobutrazol has been shown to be toxic, having developmental and reproductive effects in rats (1) although it has been shown not to be carcinogenic in humans but still very toxic to aquatic life (2). The use of paclobutrazol on food crops is therefore not recommended, but whether or not it’s actually allowed or not depends on the legislation of the country where you’re in. Some countries will allow paclobutrazol to be used as long as enough time is given between application and the development of the edible parts of the crop and then again this usually only applies to a limited number of crops where the time between use and harvest can be guaranteed to be long enough. Chlormequat and daminozide follow similar stories, although in the case of daminozide it was discovered that it was carcinogenic and its use in edible crops was completely banned world wide in the late 1980s.

The above developments caused chemical companies to search for and develop new gibberellin synthesis inhibitors with lower toxicities and lower accumulation in plants that could be approved for use in edible crops. This led to the development of Prohexadione-Ca and Trinexapac-ethyl, which are two of the most commonly used growth retardants right now. These two have considerably lower toxicities and lower half-lives in the environment. For this reason trinexapac-ethyl has been approved for general use in places like New York (3). In this document the toxicity for mammals and aquatic life is discussed and trinexapac-ethyl is not found to be a threat to humans or animals at the maximum suggested application rate. This is mainly due to the fact that it’s quickly bio degraded in the environment. A risk assessment made by the EFSA also reached similar conclusions (4). Another EFSA risk assessment for prohexadione-Ca also points in the same direction (5). Prohexadione-Ca is currently approved by the EPA for use in apples, grass grown for seed, peanuts, pears, strawberries, sweet cherry, turf, watercress, alfalfa and corn (6).

Optimal results with these new growth retardants also require careful consideration of the application formulation, the application time and adequate pairing of the PGR with the plant being grown . For example in apple trees much larger doses of Trinexapac-ethyl are required compared to Prohexadione-Ca to achieve the same results and trees that have been treated with Trinexapac-ethyl can have important reductions of flowers in subsequent crops (7).

With the development of less toxic and still highly active growth retardants, it might seem like a no-brainer to use these in crops to prevent elongation and increase yields. However the introduction of inhibitors in the gibberellin pathway is not without further consequence as this path is also important to guide the production of important phytonutrients and essential oils. When using these growth retardants it’s important to evaluate their effect in the quality of the product, as they can also lead to a change in the properties of the end product. For example in apples these PGRs can induce the production of luteoforol, a flavonoid they normally do not produce (8).