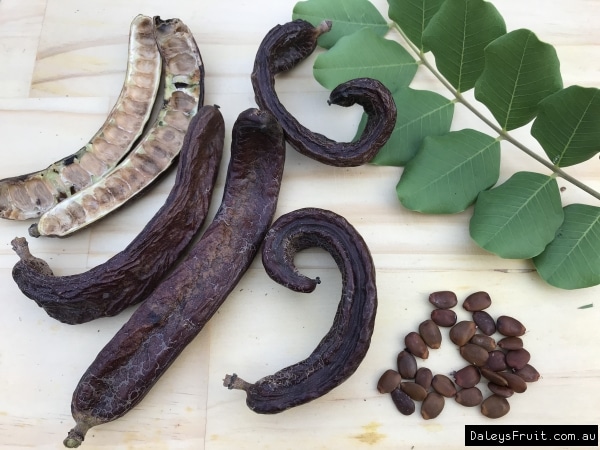 In this series of posts, we have discussed the different techniques and synthetic chemical substances that can be used to keep plants short. We discussed why keeping plants short is important, how this can be done with synthetic gibberellin inhibitors and how this can also be achieved using day/night temperature differentials. However, there are also a lot of natural substances that can be used to inhibit gibberellins, which can be used to help us achieve this same objective. In this post, we will be talking about the research around natural gibberellin inhibitors, the plant extracts that have shown this activity and what we have discovered these plant extracts contain.

When doing this research, one of the plants that showed the most promise was the carob plant. Cold-pressed extracts of green carob fruits were studied quite extensively and showed this effect repeatedly (1, 2, 3). Different fractions extracted showed the effect and researchers sought to find the specific substances responsible for the inhibition. Eventually, researchers found that the culprit was abscisic acid (4), also known as ABA. Other plant extracts that had gibberellin inhibitory effects, such as lima beans, also proved to contain significant amounts of ABA (5). So why are we not using ABA as a safe and environmentally friendly gibberellin inhibitor?

It boils down to the chemistry of ABA, which is quite complicated. First of all, ABA contains a chiral center (1′ in the image below), making it the first chiral plant hormone to be discovered. This means that its mirror images are not equivalent – like your right hand is not equivalent to your left hand – which means that these two chemical forms will behave differently in biological systems. This complicates the synthesis of the molecule substantially. Furthermore, ABA contains several double bonds, which, depending on their configuration, can make the molecule completely inactive. Unfortunately, ABA goes through a double bond rearrangement under UV light that causes the molecule to deactivate, making it unstable for everyday use. So while ABA was great on paper, in practice it was never used widely. Several chemical analogs of ABA were developed and a lot of chemistry surrounding ABA and the proteins it binds to have been explored (you can read more in this book).

Phenolic compounds were also of great interest in the 1970s since many of the plant extracts that showed inhibitory activity also contained many of these molecules. These belong to a family of compounds called “tannins” and were then explored in pure form as potential gibberellin inhibitors, with many of them showing substantial activity (6, 7, 8). This showed that extracts coming from fruits like carob had an inhibitory activity that was independent of the activity they got from ABA, although the phenolic compounds were significantly less active compared to the pure plant hormone.

In the late 1970s, the research into these natural gibberellin inhibitors stopped as the first successful synthetic gibberellin synthesis inhibitors started to surface. These were much more effective since they did not deal with the gibberellin once produced but mostly attacked the paths that were used to form the chemical within the plants. Substances such as Chloromequat and Paclobutrazol made most of this research into naturally source inhibitors irrelevant, as these were cheap to produce in mass quantities and much more effective.

With the return towards safer and more natural alternatives and advances in chemical synthesis, the direct use of ABA or phenolic substances in order to inhibit gibberellins to prevent shoot elongation starts to become attractive. If you’re interested in this path, looking at past research from the 1970s to come up with test formulations for foliar spray or root drench products would be a good initial approach. If you want to avoid the use of pure substances and all chemical synthesis, using direct extracts from plants like lima beans and carob is also a potential approach, although care needs to be taken to ensure the conditions of the extraction processes and extract storage do not destroy their active properties.